Pinot noir can be vinified from white grapes, producing dry and fragrant wines. It can be softly pressed and it will result in a rosè wine, thanks to the very short contact with grape peels. It can be vinified from red grapes; if aged in casks, high-quality red wines can be obtained. Finally, Pinot noir is the main, if not the only, base for sparkling wine (spumante).

Pinot noir is produced from grapes that require great expertise and a suitable weather. Its name is synonym for high-class and high-quality wines. It is the best grape variety in the world for the production of both white and red wines.

Difficult to cultivate and vinify, Pinot noir is recognisable for its small clustered grapes, which make it difficult to harvest by hand. The leaf is roundish in shape, a wilder trait than that of other grapes. Pinot noir is named after its bunch, solid and compact as a pine cone.

The Pinot noir grape has a black peel rich in substances conferring peculiar taste qualities, yet not affecting colouring . It is perfect for the production of excellent red and “Blanc de noir” wines (white wines made from black grapes) full-bodied and rich in spicy, fruity and floral scent.

The Oltrepò Pavese Traditional Method (trad: Oltrepò Pavese Metodo Classico) is a DOCG (an Italian quality standard for food and beverages) sparkling wine, whose production is allowed in this area. It is produced with grapes cultivated in the same areas of the Oltrepò Pavese DOC (controlled designation of origin – another quality parameter) wine. The DOC became DOCG in 2007.

The Oltrepò Pavese Traditional Method DOCG wines must be obtained from grapes grown with the following ampelographic composition: 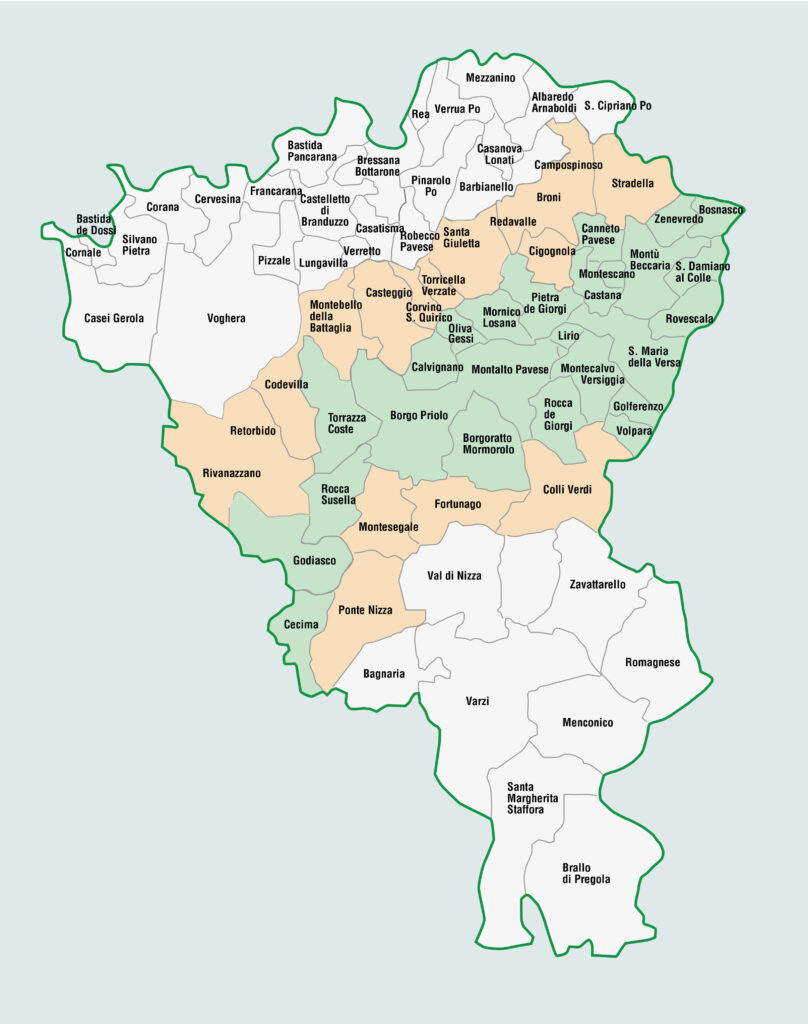 The Pinot noir Oltrepò Pavese is a DOC, still, red wine, whose production is allowed in this area. The grape variety used is Pinot noir (at least 95%) vinified from red grapes. Vinification from white and rosè grapes are also Pinot noir varieties from the Oltrepò Pavese DOC.

History and presence in Italy

Pinot noir is an ancient vine, most likely already known in Roman times BCE, and classified as a variety of the helvolae vine (“De rerum naturae”, Columella). It is mentioned for the first time as Pynoz at the end of the 14th century (1394) in Burgundy, and it has been one of the most important vines for the production of high-quality sparkling wines on a global scale since the 17th century. It has been proven to be the ancestor of the Chardonnay vine.

In European wine growing regions where Pinot noir is most cultivated today (in particular Burgundy and Champagne, France), viniculture seems to have spread from the 3rd-4th century CE. It is likely that this vine or its predecessors were present in those areas following the Roman expansion towards northern Europe: either local communities manipulated Roman genotypes or, as it has been claimed, they selected already existing ones.

At the end of 18th century, international exchanges attest to the introduction of Pinot noir from Burgundy to the area of Piacenza, fostered by the minister Guillaume du Tillot. The cultivation of such vine is also reported in the 1875 Ampelography of the Province of Alessandria, where it is said to be present for many years. In Oltrepò Pavese, it is recorded in 1884 (Ministry wine-growing census – A. Giulietti), especially in four villages located on the higher reliefs of the Scuropasso and Versa valleys. 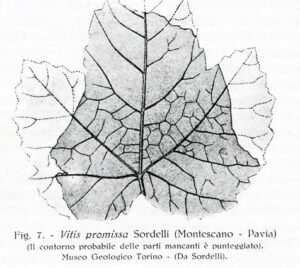 Moreover, at the end of the 19th century, a fossil was found in the area, attesting to the existance of this particular vine in Oltrepò Pavese – possibly the ancestor of today’s Vitaceae (Sordelli, 1896 in Negri, 1931 – Storia della Viticoltura Italiana).

Cultivation and the sparkling making technique

During the late 1800s-early 1900s, Pinot noir started to be cultivated in Rocca de Giorgi (Scuropasso valley), according to precise techniques devoted to the sparkling making process.

The first sparkling wine to be possibly recorded in Oltrepò Pavese is the “Montarco” in 1828, although no information is available on its vine. It is reasonable to believe that the first examples of the modern Pinot noir arrived in the western Cispadana (especially in the areas of Piacenza, Pavia, and Alessandria) between the 18th and 19th centuries. At the end of the 19th century, in this very same area, the first high-quality sparkling wine productions took place (Giorgi Vistarino winery). In the last decades of the 19th century, a traditional method sparkling wine called “Champagne” was produced at the winery of engineer Mazza from Codevilla, under the supervision of French wine experts.

The vines used in the early 1900s came from France and are believed to come from Champagne (Val-de-Marne), in particular. Afterwards, a selection of parent plants were planted, collected from the Scorzoletta Nurseries and the company’s main collection located near the former Rocca de’ Giorgi Town Hall.
Between the 1800s and the 1900s, an internationally recognised high-quality sparkling wine production was already present, result of the wine making experience carried out in the area during the previous decades. In this context, the friendly relationship between the Giorgi family from Vistarino and the Gancia family from Piedmont was beneficial to mutual exchange and progress. The latter, as it may be known, was one of the forerunner producers of sweet and dry sparkling wine in Italy.

There are no written records about the possible uses of Pinot noir in these early attemps, more focused on sweet sparkling wines; however, the company records attest that Pinot noir, together with Moscato, was a grape variety that the Giorgi winery cared for since 1908.

The spreading of Pinot noir

Over the years, Pinot noir became one of the most popular vine amongst the wineries in the surrounding areas of Rocca de’ Giorgi, particularly Montecalvo Versiggia and Santa Maria della Versa; it was also appreciated in the hills of the Scuropasso and Versa valleys. Since then, the Oltrepò territory as a whole, gave significant input to the production of sparkling wine, a distinctive quality level that can still be praised today, even internationally.

Several technical and scientific studies have been carried out on Pinot noir in Oltrepò Pavese. They include local viticulture zonation (dated 1990), experimental studies involving the complete mapping of the suitable areas for Pinot noir between 2000 and 2008 – with a vine type differentiation, amongst which the very recent rosè sparkling wine making process -, and, finally, the vine signs of adaptability following the climate change that affected the area.

We use cookies to make sure you can have the best experience on our site. If you continue to use this site we will assume that you are happy with it.OkPrivacy policy